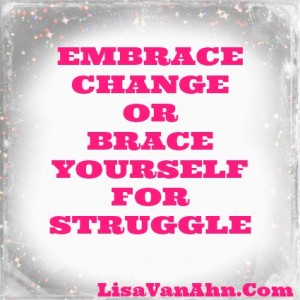 Medical research has shown that in one year the physical makeup of your body changes 99%.

That means every four years you become completely new.

So why is change so hard?

We become emotionally attached to our rituals and daily activities. We also believe they define us and changing these behaviors takes us into the world of the unknown and unproven.

“Who am I without my morning coffee”? The fear of the unknown and the belief of (unproven) negative side effects of change makes it easier to stick with that morning shot of caffeine.

The phrase “If it ain’t broke don’t fix it” is popular. What if it isn’t broke but may not be operating at the highest efficiency?

Perhaps your morning coffee feels fine. You have only one cup. It wakes you up, gets you moving. In other words it works for you. It ain’t broke.

But you may be leaving a completely different experience untested. A morning veggie juice, cup of tea, or big glass of water could offer you energy you’ve never experienced with coffee.

You won’t know if you don’t change it and try on something new.

When you’ve held down a corporate job you hate…forever, stayed in a volatile relationship for too long, succumbed to eating sugar every time you crave it, decided that you hate working out without really giving it a solid go, or held onto debt because you are afraid to “give up” the lifestyle you can’t afford, you might feel like it ‘ain’t broke’ but that’s only because you are used to it.

Your way of life becomes your habit, and habits become addictions.

Your body changes daily, cells are renewing every minute. They don’t stop to think, “Wow, I’ve been this cell for awhile and its working for me so I’m going to stay here.” The opportunity isn’t even available because they change so rapidly.

The way to create effortless change is to change often.

You know that pair of jeans in the back of your closet. The ones you haven’t worn in ten years, don’t fit anymore, and you swear you’ll wear again when you lose the weight?

You may lose the weight but you’re still not going to wear those jeans. They aren’t in fashion anymore and when you lose the weight you’ll want to buy new stuff to celebrate. But the longer you hold onto them the harder it is to let them go.

How about the ice skates you haven’t worn in five years. You are absolutely sure every time you organize your closet and pull them out that you’re going to use them THIS winter, so you put them back in their dusty spot and every year you don’t skate it’s harder to discard them. They become more valuable for every year they go unused because you’ve invested time into believing you’ll use them.

The longer you resist change the harder it becomes.

You want to expand and grow into new beliefs. but when you’ve been resisting so long change becomes harder to implement.

You can still change when you’re addicted to rituals and habits. The best way to do this is to fully commit to change and jump into it.

Get off the coffee now. Throw out those jeans today. Donate your ice skates instead of dusting them off and putting them back in the closet.

I’d love to know…how have you resisted change, and what have you done to overcome it?