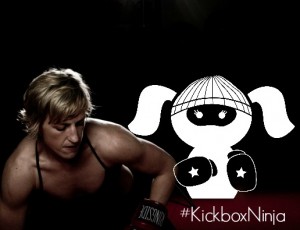 Tonight my episode of American Ninja Warrior aired on NBC. Hours of footage were collected. They taped video interviews of me, b-roll of me kickboxing, hero shots of me, and interviews after my run happened. After two hours tonight filled with anticipation there wasn’t one shot of me on screen.

I was sitting in a full house at Sandy’s Tavern with 70+ fellow #kickboxninja supporters waiting for my arrival on screen. I was confident with my back story of fighting and my current story of changing girls lives with the I AM Initiative that they would show some of my tape.

They didn’t. Was I disappointed? Yes. Of course. Did it take away from my experience? No. Definitely not.

Of 40,000 applicants I was one of 700 chosen to run the course. For those of you still wondering and since it didn’t air, here’s how it went down.

I applied in November and promptly forgot about the show. Until March 28th while I was visiting a friend in South Carolina and got the call that I would be on the show in 2 weeks. I scrambled to train. I took a few private sessions at Fight Or Flight Academy working to prep myself for the show. The show called me and asked me to come down early to shoot extra footage and asked me to bring my kickboxing gear.

I knew I wasn’t ready for the course but relied on my history and story to get me through to the episode. I taped the footage and on the day of the course I ran it in style. I like to put on a show.

I entered the stage with some boxing moves and then took out my lucky lip gloss, applied it, took off my beanie cap (a signature of mine), and fluffed my hair. The quintuplet steps nearly took me out on the 4th one and I made an epic save. I stepped up to the second obstacle, a roller coaster bar to an 8 foot jump that you needed to reach for a rope ladder. As I took the bar I looked around, listened to a few expert comments from the crowd, and flew down it, determination on my face, and my only thought, “get that rope.” My arms were straight too soon and I let go too early and did an epic back flip into the water. Upon my exit the crowd was still sad for me, but I jumped out and said, “That was awesome, I want to do it again.”

The one thing I expected was to see myself on screen and it didn’t happen. Here’s why I already know it’s the best thing ever.

1. I thrive off challenge and adversity. Lately my life has been a bit of a dream, countless trips to beautiful places that have elevated my biz and friendships and not a slip of adversity. I know without that balance I start to settle into a status quo. I will always reach for the galaxy and if I hold it in my hands I have nothing left to reach for. This little slip. It offers me the perfect amount of adversity to remind me to continue training for excellence.

2. I didn’t really want it. While watching the show tonight I saw so many athletes that I met the night of the course who’d given up 4-6 months of their life training for the opportunity to run. I kinda landed myself into running the course but didn’t put in time or commitment to doing really well on it. The athletes they showed on screen tonight worked to be there and wanted to be there more than anything. On my first round out I was just feeling happy to be there and didn’t care about much else. This will change for 2016 as now I have a fire in my belly to kill it next year!

3. Everything is meant to be. For one minute (only one) I wanted to be embarassed that I invited all my friends and family to watch this show I would be on but then ended up not being on. And then I looked around at all the support. I felt all the love. I realized that no matter what these peeps just want to see me succeed and being a part of the show whether I was aired or not was a success. They love me no matter what. It was an amazing gift of receiving love and acceptance in the face of disappointment. It was a beautiful lesson in ‘I AM ENOUGH’. I don’t need to be a TV reality sensation or even a blip on NBC to be enough. It’s just me, as I am that is enough. It was perfect timing for this lesson and it was presented with epic style.

4. I have a goal. I know that wanting it and striving for it means something. I’m going to train this year and come back next year strong, ready, and committed. So you’ll see me on the show in 2016. And I’ll definitely make a strong appearance. I’ll have earned it, worked for it, and desired it. I create my destiny. I’ve already created it. Once you’ve run the course you’ve earned the right to say…”Once a Ninja, always a Ninja.” Whether or not anyone actually sees it doesn’t make it a reality. What makes it a reality is knowing it in your heart. In our hearts we can all be ninjas. In our hearts we can all make change and do great things. This is a silly and fun obstacle course, how cool. But what about the rest of life, what about living your purpose, and giving your light to the world by being you? The greatest obstacle course is life and we can all be ninjas on this course. We can all win.

To be nobody-but-yourself — in a world which is doing its best, night and day, to make you everybody else — means to fight the hardest battle which any human being can fight; and never stop fighting.

Lisa, Always A Ninja. Until the end. No matter what NBC airs.